Please note that there are no current plans to make this available on streaming services so you'll need to order the CD. However you can sample two tracks from the album - John Robinson and Ye Jacobites - on The Huers' Soundcloud site. You can also see live versions of 'Turning Away' and 'Broken Boats' on the Video page.

Notes for the technically minded:

The album was recorded by blending a multitrack recording of the two vocal channels and two instrument channels from the mixing desk into Cubase with a stereo room mic recording of the Bose L1 PA and audience sounds (done using a Zoom H4n). The live sound was mixed by Huers' sound engineer Rich Abley and post concert mixing done by Ian and Phil at Karona Studio, Up Holland. The tracks were then put together using Steinberg Wavelab and mastered using Izotope Ozone mastering software. No overdubs were employed during the making of this album!

Track Listing
Here's page two of the CD booklet with the detail (Ian's shot of the beach from his hometown Southport, England, lightly treated in Photoshop by Phil...) 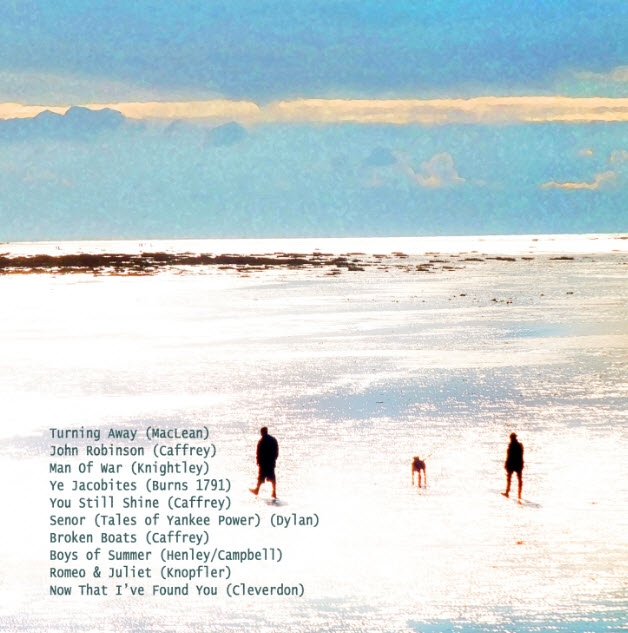 Also big thanks to Colin Smith of Bose Live UK for the supply of the excellent Bose L1 PA systems.

ThankYou and Goodnight: ©2012. Copyright control on songs by Phil Caffrey and Ian Cleverdon. Permission for other songs granted for release via PRS For Music.

Cover design by The Huers.
Photos by Phil Caffrey and Ian Cleverdon. They are: